2016 OneBeat Fellow Wu Siou Ming’s multi-disciplinary works in sound, digital video, installation and electronic music have been widely presented across Taiwan. His site specific projects explore phenomenology and human perception along with social issues facing urban spaces in his hometown: economic injustice, youth protest and unsustainable environmental practices. His installations and performances have won him numerous awards from prestigious organizations including the National Art Exhibition ROC, Austronesian International Arts, Taipei Creativity City and Taoyuan Creative Aesthetics. We asked him about his practice and methodology, his inspiration, and about the music scene in his home city of Kaohsiung.

What initially interested you in the visualization of sound, and how did you come to your current practice?

I am interested in the mystery of sound, and I often wonder what it can express. For me sound is a kind of materials which full of symbols, it can refer different layers of time, place, memory and emotion. Especially it is the perception of beginning of life, like baby in the tummy, and the birth of the universe which was called “big bang”, therefore I train myself for listening to the world.

One time I moved to a coast for recording the sound there, I was fell in love with the beach, I swam every morning. And I started to wonder what effect does the sea have on people lived beside there? What is the feeling do people have when they listen to sound of the sea all their lives? I visited the aboriginal tribal there, and listened to their myths with native language about the origin of the ancestors, the stories were all about the sea. I recorded the speaking of aboriginal elders and mixed it with sound of the sea, and combined the sound with the modulated images of the sea, and produced a piece called “Sea Inside”. I think through visual or other elements, the sound will carry more cultural meanings and open more space of imagining.

Much of your work tackles issues like economic injustice and unsustainable environmental practices. Do you find that “critical music” or “sound art” allows for more dialogue about philosophy and politics than popular music?

I agree with you, now I was tired of those love songs in popular music. I believe popular music has great influences on people, but I also believe there are another kind of perceptions exist in a sphere beyond familiar emotion model produced by popular music, which would allow more dialogue on the consciousness. And it may use more creative ways to express ideas.

I am usually touched by the changes of city I lived. Those changes often refer to the transformation of many people, lifestyles, and social values. When I was ready to leave Taipei for a new life, out of a kind of sense of commemorating or resistance, I started to use photography and recording to record some scenes that are disappearing in this city, and produced several sound installations of the scenes. And finally I put those installations on some temporary new parks, which all become new building now. in this piece I want to talk about the memories and social benefits under the change of the city, many passersby told me that they missed those scenes and the age of it. I think because of in the process of urban development, the change was controlled by the few upper class. 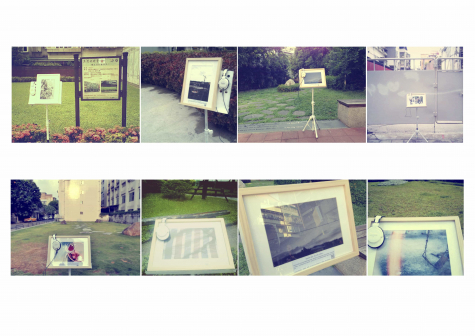 Many of your pieces are interactive (like ‘A Stage for Everyone’). Why is it important for you to actively engage with people?

I was born in a family that doesn’t know anything about art, because of we don’t have it in the background of our growth. I think the main reason is that in the early days the art system is a kind of closed system, it’s not a business of masses. But now after the experience of popular culture and media communication, the idea of art is more and more easy to be accepted by masses. And the mission of artists today is to open the door of art bigger, and try to making the experience of art more easy to be felt by audiences, therefore I think be interactive is a good thing to help the audiences experiencing the artwork personally, and not just watch it from a distance.

Even more I wish audiences can be creators to produce their own experience. The piece “A Stage for Everyone” encourages anyone presenting self through a pretty interactive light effect.

What inspires your work aside from social and political issues? Would you say that you find more crossover in your work with the contemporary visual art world than from popular music?

I think it may because I am interested in the lives of other people. Due to the work of my father, I had seen many beautiful houses with him since I was young. He worked for interior of the house, and I often wondered who will live in these beautiful houses. I don’t feel envious at that time, because in my age I don’t understand how is the life of rich people. After I grow up, I gradually learned about the relation of social structure, and understood that we have to work for the people rich than us. That make me confused about the purpose of society. I have a piece called “Welcome to South”, it questions about the city endlessly pursues construction, and the society endlessly pursues prosperity. it is a series of photos, I modulated the display mode to withdraw the RGB colors, and the pictures will become of some strange phantoms due to lack of RGB.

And yes, I agree with you. I think the experience is quite different between contemporary visual art and popular music. I can be very exciting when I am in the scene of live music, but if I want to quest for peace and meditation, visual art world helps me a lot.

Can you tell us a little bit about the experimental music scene in Kaohsiung? Maybe you could point us in the direction of some sound artists whose work you admire.

I am afraid there is no regular experimental music scene in Kaohsiung, most music scenes are for live band. But sometime there are some experimental music performances be held in alternative art space, like TaKaoBooks, Marsalis Bar, Ruh Cafe, In Our Time. The culture environment here is not a developed situation, we have to work on it.

There is a Taiwanese artist called Wu,Tsan-Cheng, he and his team spent many years to record the environment sound around Taiwan, and then he built a website named “Taiwan SoundMap” which has thousands of audio clips that we could hear. It was a great project.

What project(s) are you working on right now?

I just released a music piece called “Invisible Score”, these music were made from some of photographs I took from my city, I use a programming to analysis the pictures, and transform the data to sound. This piece is talking about how do the landscape around our lives affect our perception. If we watch the skyline of a big city, or we watch the line top of hill, what is meaning of it to the people lived there? I try to feel the surrounding environment by a kind of way of listening to the landscape.

And I also prepare to working on a sound platform which will use the idea of augmented reality to hear the sound piece. I wish I could share you more details in the future.

“We Are All Keepers of Our Culture”: 2013 OneBeat Fellow Kasiva Mutua on Uniting Kenyan Women in Music